"You're turning to God all the time"

By Julie Sly/Photography by Steve German

Frank and Lynn's faith endures after losing everything to wildfire

In the hardest of times, Frank and Lynn Hanratty of St. Mary Parish in Vacaville had many helpers and thankfully, no shortage of people with kind hearts.

When part of the LNU Lightning Complex fires tore through their 20-acre property on Pleasants Valley Road north of Vacaville in the early hours of Aug. 19, they escaped with their pets and only the clothes they were wearing. They feel lucky to be survivors and blessed that in subsequent months an outpouring of support from parishioners, family, friends and countless others helped them in their time of need, while their faith gave them the strength to carry on.

“We’ve gotten support from all kinds of people – it humbles us,” Frank says. “When you wake up in the morning with just the shirt on your back, and people give you whatever you need. That’s what I’ll remember the most.”

On the night of Aug. 18, the Hennessey Fire (part of the LNU Complex) had almost tripled in size in Napa, Sonoma and eventually Solano County. Firefighters were trying to evacuate and rescue residents and protect structures – all at once. Stopping the fires’ progress was not possible.

At about 11 p.m., a woman phoned 911 in Solano County as flames were up against her property high atop Blue Ridge Road. To reach that ridgetop, the fire had traveled 13 miles southeast in 40 hours. On the eastern downslope was Vacaville.

The resulting four-alarm call sent Solano County firefighters into Mix Canyon, with a medley of homes and farms lining the twisting canyon floor. By 11:30 p.m., firefighters reported that the flames would travel down Mix Canyon Road to Pleasants Valley Road, a thoroughfare that hooks south to Interstate 80 and less than a mile west of downtown Vacaville. They wouldn’t have time to get people out as the ferocious wind was whipping all vegetation in its path.

At their home, located between Mix Canyon and Gates Canyon Roads, Lynn and Frank were never notified by phone or emergency personnel to evacuate. Lynn woke up at 1:30 a.m. “It was unbelievable. The wind was terrible and there was fire all around us. We were able to grab one cat in the house and our dog. By the time we got to the front door, sparks and flames were coming. Our electricity had been off for two days and it was windy, but you couldn’t see the glow when we went to bed.”

There were moments of terror as they escaped down their private road with flames all around them to Pleasants Valley Road and south toward Vacaville. “I told Lynn we’ve got to go now, you don’t have time to take any stuff,” Frank recalls. “She got in one truck and I got in another truck and she followed me down the hill. We had to drive through flames and smoke and Lynn ran off the road once, but we were able to make it out.”

They drove to the home of their friends and fellow parishioners, Debbie and Tom McLaughlin, and knocked on their door, where they found shelter and ended up staying for the next three weeks.

“They lent us clothes and gave us toothbrushes,” Frank says. “We can’t thank Debbie and Tom enough for to helping us get our feet on the ground.” Since that first month, Lynn and Frank are living in a home they own in Leisure Town while they are preparing to rebuild.

Frank and Lynn moved to their 20-acre property on a hill with a seasonal creek some 34 years ago when they were still both working for the Richmond Police Department. “We wanted to be out in the country and it was pretty,” Frank says. “We liked the small business of raising our 35 cows, the chickens and the cats around the house. It’s just peaceful and content and a nice place to live.”

Neither their home nor the homes of their neighbors escaped the fire. With the help of a CHP officer (since Frank had his police badge as a retired officer), they were allowed to return several days later to start the difficult task of assessing damage or salvaging what was lost in the massive blaze. Seeing the damage up close was painful. 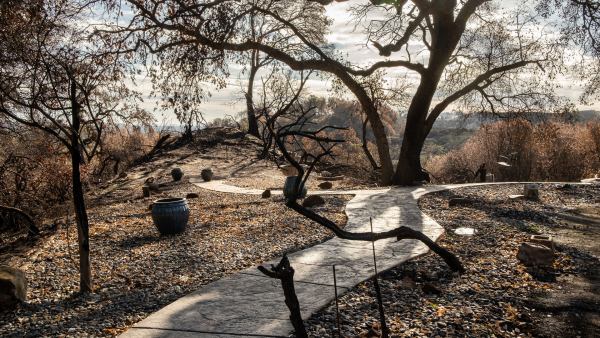 They lost their home, seven out buildings (including a barn), three vehicles and tractors. “The insurance company called it a total loss,” Frank says. “We lost pictures, furniture, even the piece of paper from when my great grandfather was discharged from the Army in 1866. We try not to think back on it and just be thankful that we are here.”

A lone shed, not more than 50 feet from their house, survived with three cats inside, “and everything else was burned all around it,” Frank says. Their cows made it through the fire only singed because neighbors were nice enough to let them use their property, where they sat under a tree. Later they had to sell the cows at auction in Galt as all of their fences burned, Frank couldn’t repair the fences, and water wasn’t available for them.

Frank and Lynn will rebuild as long as they don’t hit too many obstacles along the way. “We will likely downsize a bit on the house and reconfigure it,” Frank notes. “We don’t need something that big. I am in my 70s and Lynn is in her 60s and we just want to get back to the country, that’s all.”

“We’ve gone through a range of emotions,” Frank says. “There’s so much goodness that has come out of this. We’ve had donations and everybody wants to help. It’s such a great feeling to know there are so many good people who are stepping forward and helping us.”

Right after the fire “I couldn’t sleep for quite a while,” Lynn recalls. “It was humbling to know people at St. Mary – even though we don’t know everybody by name – came through with gift cards. I really missed my Bible, so women from the parish gave me one, a rosary and a cross to wear. Even though we are both retired more than 20 years, someone from work put out a Facebook post and there were phone calls and cards from people who got in touch with us. It was humbling as I didn’t know that many people knew us, let alone cared for us.”

Members of St. Mary Parish for the past 35 years, Frank and Lynn have been married for 42 years. Lynn grew up in Richmond and Frank in San Francisco, and they met when Lynn was a dispatcher and Frank was a sergeant with the Richmond Police Department. Frank was raised Catholic and graduated from St. Monica School and Sacred Heart High School in San Francisco. Lynn went through the Rite of Christian Initiation of Adults at St. Mary and became a Catholic in 1985, and their marriage was con-validated in the church that year. They have three children, three grandchildren and three great-grandchildren.

On the Sunday after the fire, Lynn and Frank were back at Mass at St. Mary. “Our house burned down on Wednesday and I couldn’t wait to get to church,” Frank says. “Our pastor, Father (Blaise) Berg, said he was glad to see us here and that made me feel good. Receiving Communion a few days after our house burned was the best thing we could do. Both Father Berg and Father Stephen Wood (parochial vicar) reached out to us to see if there was anything they could do.”

In the months since the fire, “my faith has strengthened me,” Lynn notes. “Every time I can’t sleep I get up and read my Bible, the Missal or my lector book. There’s also many good prayers on the myParish App, including the Litany of Trust. It’s very important to pray. My faith means everything and it has helped me a great, great deal. I feel so blessed and I feel loved.”

The tragedy of losing everything and the subsequent journey of recovery and rebuilding “has made me more aware of my faith and more thankful for everything,” Frank says. “It’s something that you turn to and you ask for help and understanding. Quite frankly I went to church to just thank the Lord for still being alive. It’s incredible when you reach a pinnacle that could have been the end of your life. I thought, there aren’t enough words to say thank you. It’s overwhelming.”

What lies ahead? It’s “a bit depressing” when they visit their property, Lynn says, “because we remember it lush and green, and with our oak trees. It’s been hard to get over accepting what’s happened but we are finally, and looking forward to some rain and everything getting greener.”

While planning their rebuild with their architect, structural engineer and surveyor, and awaiting Solano County’s permission, “we are optimistic we can get back there,” Frank says. “We do pray a lot to make sure that we are making the right decisions and choosing the correct path going forward. That’s where the church comes in too, because you’re turning to God all the time and you’re asking for God’s help with everything.”

How you can donate to the Fire Assistance Fund

Catholic Charities of Yolo-Solano, Northern Valley Catholic Social Service (NVCSS) and the St. Vincent de Paul Society are working together with local community partners to help those in need recover from the 2020 wildfire season.

You can donate money to assist those in need in the following ways: