"We are a melting pot with beautiful diversity"

Paulist Father Bart Landry, coordinator of the diocese’s Black Catholic Ministry since 2017, reminds “everyone working in this ministry that our spirituality is not exclusivity, but inclusivity, in which it is a spirituality of evangelization of how we as a people of faith have come through difficult times,” he says. “The benefit of that is sharing how God is actively at work in the sufferings of people.”

Father Bart, 50, has lived Black Catholic spirituality all his life. He was born and grew up Catholic in the small town of Church Point, Louisiana, where his family still resides.

“Our town was always racially segregated, with whites on one side and blacks on the other,” says Father Bart, a member of the diocese’s Ad Hoc Committee Against Racism. “As a child growing up, our family stayed on one side and that’s kind of how we survived.”

He began his studies for the priesthood at age 14 at Divine Word High School Seminary in East Troy, Wisconsin, 50 miles from Chicago and Milwaukee. There he experienced racism in different forms, not at the seminary itself, but when seminarians were allowed to go into town for supplies.

“I first noticed I was being looked upon differently and not in a positive light,” he recalls. “As a freshman and sophomore I didn’t quite know what was going on, as it was subtle.” Some of the other seminarians at Divine Word were Vietnamese, he notes, and it was the first time he had experienced living among others of a different culture.

He continued studies for the priesthood at St. Meinrad Seminary College in St. Meinrad, Indiana. He completed his undergraduate studies in philosophy at St. Benedict College Seminary in St. Benedict, Louisiana, then entered St. Bernard Abbey in Cullman, Alabama and professed as a Benedictine monk. He lived in monastic community for more than 13 years. As a young monk, he began theological studies at St. Vincent Archabbey in Latrobe, Pennsylvania. During this period of study he discerned a call to the apostolic life and preaching apostolate.

After entering the Paulist Fathers (Missionary Society of St. Paul the Apostle) novitiate, he completed studies in theology at the Washington Theological Union and The Catholic University of America. Since his ordination in 2007, he has served as an associate pastor in Chicago and associate pastor and pastor of Old St. Mary’s Cathedral in San Francisco. In addition to his part-time ministry in Sacramento, he offers spiritual direction, parish missions and revivals and retreats throughout the Bay Area and internationally.

There is much to be done in the Black Catholic Ministry and “all we can do is take small steps,” Father Bart notes. It’s difficult to put a number on how many Black Catholics are in the diocese, because “the population is spread into small pockets, meaning black Catholic families belong to all parishes across the 20 counties, so trying to involve them in this ministry without pulling them away from their parishes is a challenge. They already have commitments to their respective parishes. But ideally they have a Black Catholic spirituality they can share in their parishes.”

When every culture acknowledges there is a lot of learning still about other cultures, that’s when we are going to effectively tackle racism and discrimination among us.
- Father Bart Landry, CSP

Bishop Jaime Soto recognized the need to serve Black Catholics in the Vallejo area, so a Gospel Mass was started in 2018 at St. Basil Parish in Vallejo, with the assistance of Deacon Casey Walker. The Mass is at 11:30 a.m. on the second Sunday of each month, complete with a gospel choir providing music. “The response has been tremendous, not just from the African American community, but the general population of the parish,” Father Bart says. “St. Basil has a very dynamic community and there’s a beautiful mix of ethnicities.” He is grateful for the collaboration at St. Basil with Father Ambrose Ugwuegbu, parochial administrator, and Father Jeremy Santos, parochial vicar, who are “incredibly supportive of the ministry.”

Father Bart also works closely with a leadership team for the Gospel Mass held at St. Rose Parish in Sacramento on the second Saturday of each month at 5 p.m. Those involved in the Black Catholic Ministry are “still looking at creative ways to re-energize and re-engage the people of the diocese to once again get involved,” Father Bart says. “It’s more a means of convincing them that we need your energy and your time.”

He views the tasks of the Ad Hoc Committee Against Racism as helping others to “understand racial inequalities – real or imagined – and see how the church as a whole in the diocese can come to respond to the needs and concerns of different people.”

“First and foremost, we must acknowledge that racism exists, and second, it’s not just about black and white, but choosing our terms carefully,” he notes. “How can we get people excited from a positive perspective? We are a melting pot and have beautiful diversity among us, and we need to emphasize this more. It’s a different reality for many people. When every culture acknowledges there is a lot of learning still about other cultures, that’s when we are going to effectively tackle racism and discrimination among us.”

About Black Catholic Ministry in the Diocese of Sacramento at www.scd.org/bcm 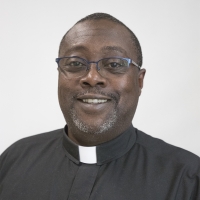