Breaking down barriers, building up community

When Kerri Bray-Smith became the new principal of Sacramento’s St. Philomene School in 2017, she considered how the school might set itself “apart.”

“We wanted to offer more to our students,” Kerri explains, describing how “more” came to mean teaching and learning in two languages.

In collaboration with Lincoln Snyder, former executive director of Catholic schools, and the diocese’s Catholic Schools Department and its Dual Language Immersion coordinator, Yasmin Castellanos, a team traveled to Los Angeles to visit a Catholic elementary school with a well-established multi-language immersion program. There were no such curricula in the Sacramento Diocese and only 30 Catholic elementary schools nationwide with language immersion offerings. 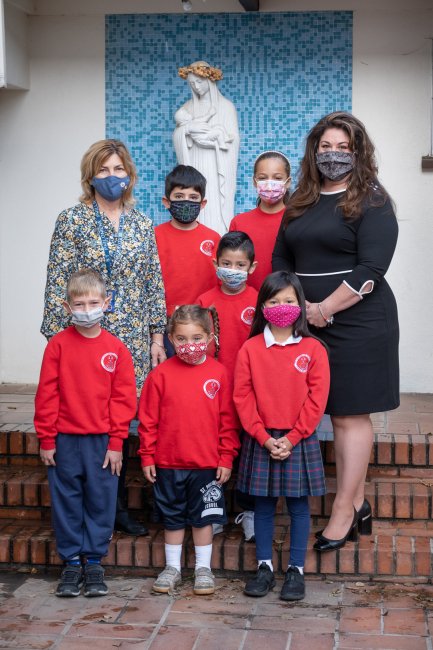 “From that day forward, we put our heart and soul into the mission of our school,” Kerri attests, comfortable and confident in the decision that, in effect, prompted a complete rewrite of the school’s mission statement.

Kerri recalls the beginning of their journey. She applied and was accepted to Boston College’s Two-Way Immersion Network for Catholic Schools (TWIN-CS) to ensure ongoing staff training, support and guidance in the important work of shaping the school’s new mission. In the hard work of stringing together the right words – powerful words – teachers, staff, priests and parents participated in a meaningful DLI transformation never before pursued in a local diocesan Catholic school.

“We just kept working, reworking and refining it,” she says, reflecting on their mission statement with contentment in how it heralds the school’s purpose, guides school programming and refines decision-making. Inclusivity. Multicultural. Community. Leaders. Service. Moreover, the mission statement aligns perfectly with the school’s larger vision of forming students “as faith-filled stewards devoted to serving our global community.”

During the summer months, teachers and administrators regularly attend TWIN-CS training in Boston on best practices. Even amid the pandemic, all Spanish-speaking teachers began their own necessary coursework for bilingual certification, which certifies their abilities to teach in both English and Spanish. They also have participated in University of Notre Dame’s Latino Enrollment Institute and the school holds membership with California Association of Bilingual Education.

After the initial school visit in Los Angeles in the fall of 2017, Yasmin cites how “very inspired” she was, to the point of returning to school for her master’s degree in DLI programs.

“I started to look into the amazing things that this program offers for all children,” she conveys, describing how “monolinguals of Spanish or English, or bilingual homes” all benefit immensely from learning in two languages.

This approach represents decades of study and growth from the inception of bilingual education in the 1960s. The norm at that time had been to “remove the home language” in favor of English. Studies found this led to cognitive delays in students. To remedy this, professors and researchers Wayne Thomas and Virginia Collier pioneered a new “additive” thinking in the 1980s, which prescribed keeping a home language and adding the second language.

“The children are developing both languages,” Yasmin says, clarifying that the findings hold true for any home language – English, Spanish and Mandarin most notably, and even indigenous languages.

“They’re using the ‘other’ language to help them to continue to build their language skills,” she explains, emphasizing that simultaneously they enhance their cognitive development.

St. Philomene School started the DLI offering with its transitional kindergarten (TK) in 2017 and adds one grade to the program each year. Today, TK through third grade participate. This year the school achieved a milestone with 60 percent of the entire student body of 173 students engaged in the DLI program with half of all instruction in English and half in Spanish.

“They’re becoming bilingual and biliterate in all subjects,” Yasmin confirms, describing a rotating curriculum, year by year, in languages, religion, sciences and math.

“Children are learning the languages not just socially as we interact with them but the ‘academic language,’” Yasmin says, inferring the practical application of language skills in articulating sentences, preparing book reports, speaking in front of the class, and putting ideas together.

“We are teaching them to think differently,” Yasmin adds, suggesting an astute degree of problem solving as they “learn how to learn.” These little learners are not simply receiving the words of a language, rather they think in the language and apply it to all their studies.

The academic gifts are plentiful as are the findings that show dual language learners excel with higher high school graduation rates and higher achievement scores.

“They also have stronger bicultural identity and self-esteem,” Kerri reports, further connecting these assets to students’ ease in moving into adulthood and professional career life.

“Children are masters of their own language,” Yasmin proposes, suggesting that their primary language strength facilitates formation and evangelization in and among these littlest disciples. Whether in virtuous behavior or academic activity, they translate, share and interact at new levels, developing a sense of “other” and a natural inclination to serve and help each other learn a second language.

As part of their religion studies “they learn to pray in both languages,” opening up the whole world as they experience it in their diverse school community. Yasmin believes the students’ awareness of “community has now grown because they share and feel God” through a multicultural call to mission. Their bilingual, biliteral and multicultural gifts function for nothing less than breaking down barriers and building up each other, and community.

Just the availability of the DLI program does a good share of building up, too. Kerri relates the positive effects on enrollment with many new families choosing the school expressly for its dual language offering.

“The number of Catholic families has increased proportionately,” Kerri says regarding the overall growth. She also welcomes non-Catholic or non-practicing families with an ecumenical if not evangelistic spirit. “Our mission is to be inclusive,” Kerri conveys, calling out the importance of an inclusive mindset for their DLI work, yes, but also for Christian discipleship.

The multicultural aspect of the school population gives witness to its inclusivity. Teachers and students bring a wealth of heritage histories from Mexico, South America, Chile, Cuba, Africa, the Philippines and America Samoa. Many students speak three languages.

“It takes serious dedication from parents and families,” Kerri acknowledges, sharing how she spends a great deal of time with prospective families to inform and educate about their program. She admits some families choose to go elsewhere and a few families have disenrolled but generally, “parents want this for their children” and they are committed. The teachers and staff also work hard to design and create materials to support families and parents who are not bilingual.

“These students are coming to us at age 4 and their cognitive readiness is at its peak,” Kerri insists. “It’s the prime time before age 11 to learn a new language,” she says with evident gratitude for the gifts of Dual Language Immersion education and the blessed opportunity to give students more.

About Catholic schools in the Diocese of Sacramento at www.scd.org/schools.